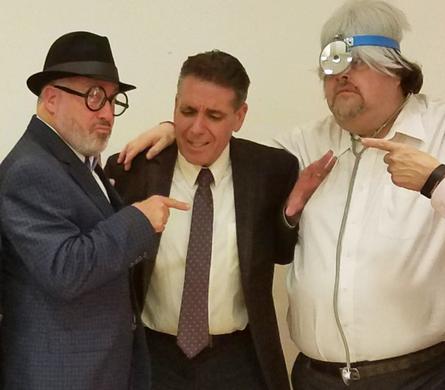 ​​​The protagonists in this Neil Simon play are Al Lewis and

Willie Clark. Lewis and Clark were once a successful

vaudevillian comedy duo known as the Sunshine Boys. During the later years of their 43-year run, animosity between the partners grew to the point where they ceased to speak with each other. Eleven years prior to the events of the play, Al retired from show business, leaving Willie struggling to keep his career afloat.

Willie, now an old man struggling with memory loss, reluctantly accepts an offer from his nephew Ben, a talent agent, to reunite with Al for a CBS special on the history of comedy. Willie and Al meet in Willie's apartment to rehearse their classic doctor and tax collector sketch. The reunion gets off to a bad start, with the two getting into heated arguments over various aspects of the performance. However, thanks to the urging of Al's daughter, the two decide to go through with the performance.

Willie and Al's dress rehearsal at CBS' studio ends badly. Willie is enraged when Al repeats his old habits of poking his chest and accidentally spitting on his face. As Al walks off the stage in regret, Willie has a heart attack as a result of his agitated state.

Two weeks later, Willie is recovering under the care of a nurse. Upon Ben's recommendation, he decides to move into an actors' retirement home in New Jersey. Al, concerned about Willie's well-being, makes a visit. When the two talk, it is revealed that Al will be moving into the same home as Willie.