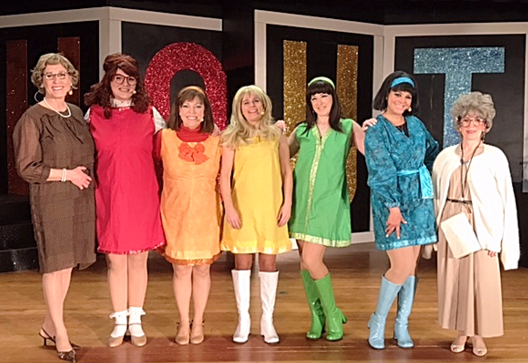 (The Red Girl), 30's (Green, Blue, and Yellow girls) and 40's (Orange girl) who all face tough situations, usually involving relationships. Throughout the story, all five women send letters to Gwendolyn Holmes, who works for the magazine Shout! in an advice column and gives them advice on how to deal with said issues.

The Yellow girl is the only American character in the show, who traveled all the way to Britain in order to see Paul McCartney. The Orange woman is shown as a full grown woman who is married, in her forties, and is starting to suspect her husband is cheating on her. The Blue girl is gorgeous and wealthy, and while she can go on and on about how perfect her life is, she does face some questions regarding her sexuality. The Green girl is always hooking up with men and throwing innuendos around. Finally, the Red girl is the youngest and most hopeful character; she is a bit hopeless in the beginning, stating she is not good-looking like other girls, until the man of her dreams comes along.