It's the opening night of The Golden Egg on Broadway, and the wealthy producer (Julia Budder) is throwing a lavish party in her Manhattan townhouse. Downstairs the celebrities are pouring in, but the real action is upstairs where a group of insiders have staked themselves out in the producer's bedroom, waiting for the reviews to come in. Included are the excitable young author, the brilliant but unstable director, the pill-popping leading lady, and the playwright's best friend - an egotistical but insecure comic actor. Also present are a fawning, hypocritical drama critic and a would-be singer working as a part-time servant.

The good-natured friendliness with which the evening begins gets more intense and funny as the reviews (all bad) come in, and those assembled seek desperately to pin the blame on each other. As euphoria slides into despair, the narcissism, ambition, childishness and just plain irrationality that infuse the theatre and its residents take over, and as the curtain falls plans are already being made for their next venture—this one sure to be the hit they have all been hoping for. 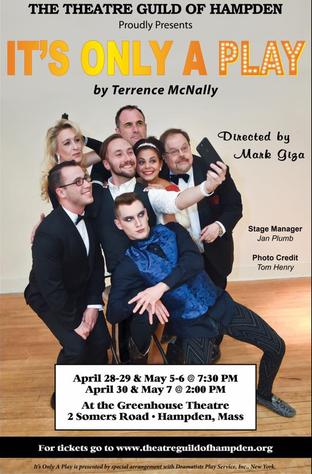 IT'S ONLY A PLAy